This year Haven set out on a nationwide mission to raise £125k for the RNLI in 2022, which has already been exceeded by a whopping £75k (£200k). A milestone which has been achieved in Haven’s first year of operating since Covid-19, as well as breaking Haven’s own record for the largest sum raised for the RNLI since the partnership began.

To mark this momentous occasion, Haven and the RNLI commemorated 5 caravans at 5 different parks in honour of the incredible crew and lifesaving lifeboats from the local RNLI station.

Burnham-on-Sea Holiday Park kicked off celebrations with a caravan named after John Godfrey Morris, the second lifeboat to ever be launched at Burnham-on-Sea RNLI. Throughout its remarkable fifteen-year service, the lifeboat was involved in assisting four different ships, saving a total of sixteen lives.

Littlesea Holiday Park was given the honour of renaming a caravan after Weymouth RNLI’s first ever lifeboat, The Agnes Harriet. Unveiled in 1869, she was responsible for saving nine lives at sea during her eighteen-year service.

Further north of the UK, Craig Tara Holiday Park and their newly appointed RNLI caravan the ‘Mary Sinclair’ was the very first lifeboat to be officially launched from RNLI Troon.

Both Seashore and Lydstep Beach took a different approach by renaming caravans in honour of two brave volunteers who put their lives on the line to keep people safe at sea.

At Seashore’s local lifeboat station, William George Flemming was the name of the Coxswain that served among the crew for nearly half a century, cementing him in history as one of Norfolk’s most decorated lifeboat crew members.

Lydstep Beach honoured Grace Darling, the first woman to ever receive a RNLI medal for bravery whilst also sharing her name with the first lifeboat launched from Tenby’s station back in 1852.

Corrie Parris, Haven's PR Manager said, “We are proud to support the RNLI and honour the selfless and important work their volunteer lifesavers do. By commemorating them in this way we hope we will provide a permanent reminder to our 2.5 million annual holidaymakers of the commitments the RNLI’s volunteer crews have made – and continue to make – in ensuring we enjoy our country’s fabulous coastline safely. This is why we have been supporting the lifeboats since 2018 as many of the RNLI’s lifeboat stations are near to our 41 parks.”

The ambitious target set for Haven to raise £125,000 in 2022 has been surpassed, as the holiday company celebrates raising £200,000 this year alone. With every penny going towards the essential kit and training the RNLI need to stay safe and save lives at sea.

Georgie Stanton, RNLI Senior Partnerships Manager said: “As a charity we rely on donations to run our lifesaving service, so we are extremely grateful for the support we have received from Haven during our partnership. Their fundraising efforts have helped to train and equip our lifeboat crews to save lives at sea, and their spreading of water safety messages to their guests will undoubtedly have prevented incidents from taking place. These caravans are a fantastic way to recognise the vital work our volunteers and lifeboat stations do for their local communities to keep them safe while they are enjoying time at the coast.”

As one of Britain’s leading family holiday companies Haven own and operate 41 award-winning family holiday parks throughout England, Scotland, and Wales. They offer a full programme of activities and entertainment alongside being located next to some of Britain’s most beautiful beaches and brightest resorts making them a great base for exploring the local area.

Founded in 1824, the Royal National Lifeboat Institution (RNLI) provides a 24/7 search and rescue service out of 238 lifeboat stations around the UK and Irish coasts. Its seasonal lifeguards also patrol over 240 beaches around the UK and Channel Islands. As a charity, the RNLI is independent from government and almost entirely funded by donations. Ninety-five percent of the RNLI’s people are volunteers, including 4,800 lifeboat crewmembers and more than 22,000 community fundraisers. Find out more at rnli.org. 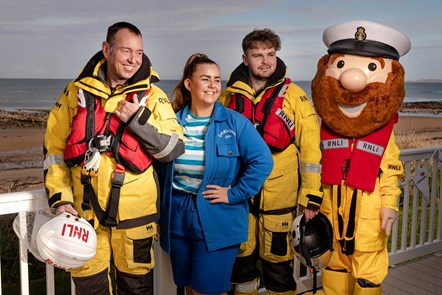